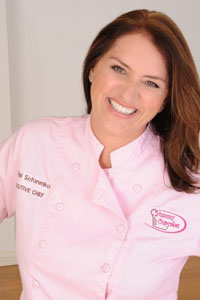 "As the Founder and Executive Chef of Yummy Cupcakes,
I am its #1 fan!

I am proud to serve our delicious cupcake treats
in a fun and exciting variety of artisanal flavors!

I hope you love them as much as I do."

Being a ‘foodie’ and being especially fond of all things cupcakes, Tiffini Soforenko feels she has the best job around!  Tiffini is the Founder and Executive Chef of the original Yummy Cupcakes® which has been proudly serving its guests with gourmet cupcakes and gourmet cupcake treats since she created this concept in March of 2004.

Tiffini takes great pride in selecting the ingredients for her recipes. As a Mom of three, she knows the importance of serving real, wholesome, top quality foods.  Local, fresh, real, and free of any preservatives or chemicals are just some of the things that set her recipes apart.

Tiffini was recently featured on Food Network’s “Unwrapped” as well as on the Rachael Ray Show.  Tiffini has also been seen on ABC, KTLA, Fox, Travel Channel, Fox Business News, KCal9 News and EXTRA.  She is President of the Advisory Board for Le Cordon Blue College of Culinary Arts and has judged many sweets and cake competitions.

Tiffini gives back to her communities in many ways including volunteer time at local schools and nonprofit organizations to teach her art to and motivate aspiring young bakers to go for their dreams.  Tiffini lives in Los Angeles with her husband of 17 years…Nik, and their three children, Logan 14, Madison 11 and Bailey who is now 7.